It’s been unbelievably hot lately! As the temperature climbs, turn that tub of greek yoghurt into a satisfying dessert. Greek yogurt has enjoyed a stellar rise in popularity recently, as is strained, the process removes most of the whey and creates a thicker, creamier yogurt that is higher in protein and lower in sugar than traditional yogurts. There are a bunch of ‘Greek Style’ yoghurts available in supermarkets, but for this recipe, we’ve used Chobani which is one of our favourites. Spoon the desired quantity of yoghurt onto a cheesecloth over a bowl, wrap up the yoghurt by gathering and twisting the cloth and give the yoghurt a squeeze to further drain out any water in the yoghurt. For this recipe there are two flavours in the cake, so split the drained yoghurt into two bowls. Scoop the plain yoghurt into muffin moulds if you are making individual servings, or a larger cake mould if you are making to share. Pro tip: Tilt the mould when layering to create a more stunning layer effect. Place moulds into freezer for a few hours to set.

For the remaining yoghurt, mix in some cocoa powder for a chocolate flavoured second layer or mix in some blended berries for a more tropical taste.

Once the first layer is set, top up the mould with the second flavour of yoghurt. To give the cake more texture, fillings could be added to the yoghurt, for example more berries or granola. I topped up this version with Arnold’s Farm Granola Clusters in Neapolitan (check out our granola clusters snack here). 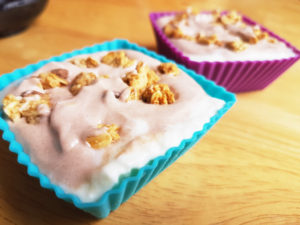 This mix goes back into the freezer to set.

Meanwhile, crush some graham crackers and mix with butter for a quick and yummy biscuit crust. form up the crust and flatten to size in a thin layer on a baking sheet. Refrigerate to set. Once the yoghurt is set in the moulds, top them off with a bit of leftover yoghurt and flip the moulds over to place on the biscuit base. One more short stint in the freezer and your froyo cake will be ready. Recipes like this with long setting times are great for mums with kids underfoot, I was even able to squeeze in a trip to the cinema with the boys while the yoghurt was setting and came home just as it was ready to be served as dessert. Written By
Jessica
More from Jessica
If you are always looking for ideas that you can prep over...
Read More