How time flies! The newest and cutest member (sorry Prince George!) of Britain’s Royal Family recently turned one.  Here’s a look back on her first year of life and some of her most adorable moments: 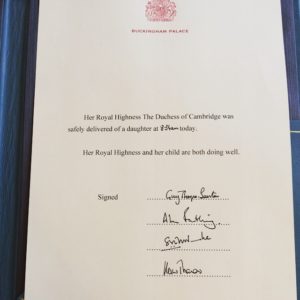 Born on the 2nd of May, 2015 at 8.34am, Princess Charlotte of Cambridge is now fourth in line to the throne, after her golden-haired brother, Prince George. The Duke and Duchess released a set of photos of Prince George and Princess Charlotte when she was a month old.
P.S. –  Look at Prince George’s chubby cheeks and rosy glow! And that look of adoration he gives his little sister — everybody together now…awww! She was christened at St. Mary Magdalene Church on the Queen’s Sandringham Estate in Norfolk on the 5th of July, 2015. Dressed in the same gown her brother wore during his christening, Charlotte was the seventh royal baby to wear the gown. The Duchess showed off her photography skills in this self-shot photo of a slightly older Charlotte. Charlotte’s first time experiencing snow when the family took a vacation to the French Alps in March, where she shows off her two new teeth! This photo was part of a series taken and released by her mum a days before her first birthday. Dressed in different shades of blue and white, we think she’s starting to look more and more like her elder brother. Credit: All images from Instagram/@kensingtonroyal

Written By
Samantha Jong
More from Samantha Jong
Stripes are a tricky one to style with as they can be...
Read More