Though it’ll be great to spend Christmas in a white snowy destination, luckily for those of us not leaving our island’s sunny shores, there are still ways to experience the magic of snow in Singapore

Here’s where you can go, from places where its free for the public to those that charge for the experience: 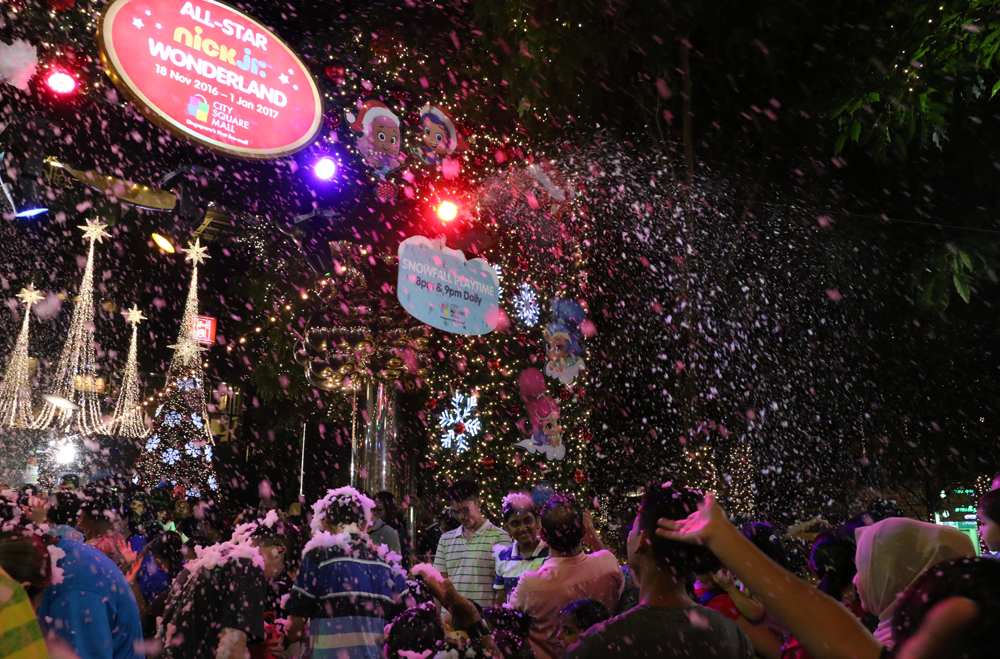 Head straight for the arches to get the best snowfall experience at City Square Mall and when the festive lights are turned and the carols start playing, you’ll be rewarded with fresh falling ‘snow’. Those staying in the east side of Singapore can also get in on the snow action without venturing out too far, and the best part is that it is free for the public to enjoy.

It’s snow in the middle of a whimsical fantasy garden at Tanglin Mall with life-size winter animal topiaries and giant toad stools, and it comes in two forms here: first as an avalanche for the first 15 minutes, and the snow for the next 15 minutes. Not everyone gets to fly off to a snowy destination at the end of the year, but they can experience some snowfall before leaving the country or just by making a visit to the airport. There isn’t just snow; it’s part of a light show that includes music and dancing trees. Billed as the largest snow-filled display house in Singapore, kids can frolic around in real snow, making snow angels and snowmen, or even sliding down a snow luge at the Snow FunHouse on the front plaza of Plaza Singapura. There’s also real snowfall from Friday to Sunday at 7.30pm. Spend $30 in a single receipt to redeem an entry pass for two people, which include winter jackets and footwear.

Gardens By the Bay There’s lots going on at Christmas Wonderland at the Gardens, from the indoor ice-skating rink and 25m long ice slide, as well as Snow Playground where little ones can play with snow, to the Santa’s Cottage where you can meet the man himself. And for snow, head to the 19.7m-high Spalliera Castel del Monte, the largest light sculpture in southeast Asia where you can capture that perfect family photo. There’s a flurry of snow to be had at Universal Studios Singapore. As part of Santa’s All-Star Chrisitmas, snow falls every hour at three different parts of the park, including at the end of the every show at Santa’s Village. Even if snow is not your thing, the dazzling festive light display that broke the Guinness World Record for most number of light bulbs in an indoor venue. The only catch, you’ll have to pay for enter.

Written By
Seow Kai Lun
More from Seow Kai Lun
Going overseas for a holiday is something everyone looks forward to. The...
Read More